Lee County is the westernmost county in the U.S. Commonwealth of Virginia. As of the 2018 census estimate, the population was 23,541.[1] Its county seat is Jonesville.[2]

The first known Europeans to enter what is present-day Lee County were a party of Spanish explorers, Juan de Villalobos and Francisco de Silvera, sent by Hernando de Soto in 1540, in search of gold.[3]

The county was formed after the American Revolutionary War in 1792 from Russell County. It was named for Light Horse Harry Lee,[4] the Governor of Virginia from 1791 to 1794, who was famous for his exploits as a leader of light cavalry during the war. He was the father of Robert E. Lee, later a West Point graduate and career US Army officer who became the commanding General of the Confederate Army during the American Civil War.

Lee County was the final front on the Kentucky Trace, now known as the Wilderness Road and The Trail of the Lonesome Pine. During the 1780s and 1790s, fortified buildings called "stations" were built along the trail for shelter from Indian raids as the settlers followed Daniel Boone's path into the Kentucky frontier. The stations in Lee County were Yoakum Station at present-day Dryden, west to Powell River and Station Creek at today's Rocky Station, then to Mump's Fort at Jonesville, followed by Prist Station, Martin's Station at Rose Hill, Chadwell Station at Chadwell Gap, Owen Station at Ewing, and finally Gibson Station, which still bears its original name.

One of the largest early landowners was Revolutionary War officer and explorer Joseph Martin, after whom Martin's Station and Martin's Creek at Rose Hill are named. Due to his rank of command, Martin had been awarded some 25,000 acres (100 km2) in a land grant after the war. He divided the land and sold it as a speculator. Rose Hill was established in 1832 as the first federally recognized post office in Lee County.

The economy of Lee County has been based largely on growing tobacco and mining coal. The decline of both has resulted in high unemployment in the county and a decrease in population since 1940, which was the peak.

Using the slogan Where Virginia Begins, the county has attempted to increase its heritage tourism industry by emphasizing its role in the route used by settlers going west through the Cumberland Gap, at Lee County's western tip.

Lee County shares Cumberland Gap National Historical Park with Kentucky and Tennessee. Attractions listed in the park include Hensley's Settlement, the Pinnacle Overlook, the Sand Cave, and the White Rocks overlooking the towns of Ewing and Rose Hill in Virginia. 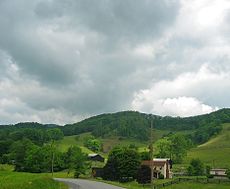 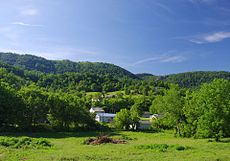 Voters in Lee County wavered between Democratic and Republican presidential candidates throughout much of the twentieth century. Since the beginning of the twenty-first century, the county has become more consistently Republican, voting overwhelmingly for Donald Trump in both 2016 and 2020. Republicans have consistently won local elections in recent years, as well.

Pennington Elementary School, consisting of three buildings built at various times (1912, 1917 and 1937), was demolished in 1989. A bank was constructed on its Morgan Avenue site. Three other elementary schools, Ewing, Keokee and Stickleyville, were closed in June 2012.[14] 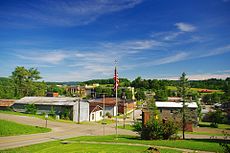