Harlan County is a county located in southeastern Kentucky. As of the 2010 census, the population was 29,278.[1] Its county seat is Harlan.[2]

With regard to the sale of alcohol, it is classified as a moist county—a county in which alcohol sales are prohibited (a dry county), but containing a "wet" city, in this case Cumberland, where package alcohol sales are allowed. In the city of Harlan, restaurants seating 100+ may serve alcoholic beverages.[3]

Harlan County is well-known in folk and country music, having produced many prominent musicians. During the 20th century it was often a center of labor strife between coal mine owners and workers, especially in the Harlan County War of the 1930s. The coal mining industry began to decline in the 1950s and was accompanied by a steadily declining population and depressed economy. Harlan became one of the poorest counties in the United States. 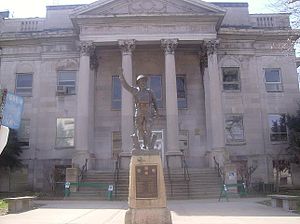 In 1791 the previous Kentucky County was incorporated into the new nation as a separate state, Kentucky. This change became official on June 1, 1792. In 1799, part of Lincoln County was divided off to create Knox County.

Harlan County was formed in 1819 from a part of Knox County.[4] It is named after Silas Harlan.[5] A pioneer, he was born on March 17, 1753 in Berkeley County, West Virginia (when it was still part of Virginia), the son of George and Ann (Hunt) Harlan. Journeying to Kentucky as a young man with James Harrod in 1774, Harlan served as scout, hunter, and held the rank of Major in the Continental Army. Harlan assisted Harrod's party in Harrodsburg to deliver gunpowder to settlers in Kentucky, and to assist them against the British in the Revolutionary War.

With the help of his uncle Jacob and his brother James, Harlan built a log stockade near Danville known as "Harlan's Station". He served under George Rogers Clark in the Illinois campaign of 1778–79 against the British. He commanded a company in John Bowman's raid on Old Chillicothe in 1779, and assisted Clark in establishing Fort Jefferson at the mouth of the Ohio River in 1780.

Silas Harlan died leading the advance party at the Battle of Blue Licks on August 19, 1782. At the time of his death, Harlan was engaged to Sarah Caldwell, who later married his brother James and was the grandmother of U.S. Supreme Court Justice John Marshall Harlan.[6][7]

The county was reduced in size when Letcher County was formed in 1842 using a part of Harlan's territory; it was further reduced when Bell County was formed on August 1, 1867, from parts of it and Knox County.[8] Its present size was attained in 1878 when its northwestern part was partitioned to form Leslie County.

The county has been the site of repeated attempts to organize labor and gain better deals from owners, beginning in the early 20th century, primarily related to the coal mining industry. What was called the Harlan County War in the 1930s consisted of violent confrontations among strikers, strikebreakers, mine company security forces and law enforcement. These events led to the county's being called "Bloody Harlan." After the Battle of Evarts, May 5, 1931, Kentucky governor Flem D. Sampson called in the National Guard to restore order. Ballads sung on the picket line at the Brookside mine in Harlan County were captured on film by documentarian John Gaventa.[9] The county was the subject of the film Harlan County, USA (1976), which documented strikes and organizing during a second major period of labor unrest in the 1970s.

They say in Harlan County
There are no neutrals there
You'll either be a union man
Or a thug for J.H. Blair

—"Which Side Are You On?"
by Florence Patton Reece

In 1924, Conda Uless (Ulysses) "Condy" Dabney[10] was convicted in the county of murdering a person who was later found alive.[11]

From the late eighteenth through the mid-nineteenth century, Harlan County and nearby counties were settled by numerous persons of multiracial descent, with African, European and often Native American ancestors. Descendants, some of whose members have been called Melungeon, have documented the racial heritage of Harlan's early settlers through 19th-century photographs, DNA analysis and historic records. In 2007, the Ridgetop Shawnee Tribe of Indians formed as a non-profit to work on improving the lives of multiracial families and preserving Native American heritage. It established the Kentucky Native American Data Bank, which has the names of 1,000 people of documented Native American descent related to this region; it is accessible for free on Rootsweb. 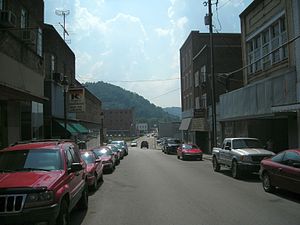 Black Mountain, located east of Lynch, is Kentucky's highest point, with an elevation of 4,145 feet (1,263 m) above sea level.

Of 3,142 counties in the United States in 2013, Harlan County ranked 3,139 in the longevity of both male and female residents. Males in Harlan County lived an average of 66.5 years and females lived an average of 73.1 years compared to the national average for longevity of 76.5 for males and 81.2 for females. Moreover, the average longevity in Harlan County declined by 0.6 years for males and 2.6 years for females between 1985 and 2013 compared to a national average for the same period of an increased life span of 5.5 years for men and 3.1 years for women. High rates of smoking and obesity and a low level of physical activity appear to be contributing factors to the lowered longevity for both sexes.[19]

For 100 years, the economy of Harlan County and other counties in eastern Kentucky was based on coal mining. The latter-twentieth-century decline of coal production and employment has led to widespread poverty and high unemployment.

Although coal mining began much earlier, the first shipment of coal by railroad from Harlan County occurred in 1911 and coal production boomed thereafter. Mining employment in Harlan County rose to 13,619 in 1950.[20] The number of employed miners had declined to 764 by June 2016.[21] During the same period, the population of Harlan County declined from 71,000 to less than 28,000. Unemployment has been as high as 20 percent (September 1995) and has consistently been higher than the U.S national average. Unemployment in December 2016 was 9.5 percent, compared to 4.8 percent in the nation as a whole.[22] Harlan County ranked in the highest 10 percent of all United States counties in the prevalence of poverty among its residents.[23]

By 2016, more than half of the county's income came from transfers from the Federal government such as Social Security, Medicare and Food Stamps.[25]

As of 2018 new jobs are being located in the county as Teleworks USA has opened a hub in the city of Harlan. This has provided over 200 new jobs as of April 2018 [26] SEKRI, located in the Blair community near the city of Cumberland, also announced expansions and added an additional 100 jobs in March 2018.[27]

Harlan County Public Schools covers all of Harlan County, except for the city of Harlan and some small unincorporated communities adjacent to the city. The district operates one high school, Harlan County High School, which opened in August 2008. The school nickname is Black Bears, reflecting the area's increasing black bear population. The new high school, located in the rural community of Rosspoint east of Harlan, replaced three other high schools:

Harlan Independent Schools is a separate district covering the city of Harlan and operating the following schools:

There are two private schools in the county:

Elmore Leonard's novels Pronto, Riding the Rap, and "Raylan" feature Raylan Givens, a Harlan County native, and his short story "Fire in the Hole" has Givens returning to Harlan.

In the James Jones novel "From Here to Eternity", Robert E. Lee Prewitt, a bugler in the Army and a main character, is from Harlan County.

Harlan County is mentioned in many versions of the 18th century folk song "Shady Grove". The famous labor song, "Which Side Are You On?", was written by Florence Reece in 1931 in and about Harlan. It has been covered by many artists from Pete Seeger and the Almanac Singers to Billy Bragg, the Dropkick Murphys, and Natalie Merchant. Harlan is mentioned in the Aaron Watson song "Kentucky Coal Miner's Prayer".

It is mentioned in Robert Mitchum's recording "Ballad of Thunder Road" as a stop along a moonshine route. It is the subject of the Darrell Scott song "You'll Never Leave Harlan Alive", which has been covered by Brad Paisley, Dave Alvin, Kathy Mattea, and Patti Loveless, among others, and has been heard in several versions on the TV drama Justified.[43]

Dierks Bentley's song "Down in the Mine", on his Up on the Ridge album, mentions Harlan. The band Spear of Destiny included the song "Harlan County", on their 1985 album World Service. Harlan County is mentioned in the Merle Travis song Nine Pound Hammer which he wrote in 1939; it has been covered by many bluegrass artists including Doc Watson.

Wayne Kemp wrote and recorded a song called "Harlan County." Harlan County is also the name of the first album by Jim Ford, 1969, as well as a song bearing the same name. The Dave Alvin song "Harlan County Line" take place around the area of Harlan. Singer/Songwriter Loudon Wainwright III included a song titled "Harlan County" on his 2014 album I Haven't Got The Blues (Yet). Harlan County is mentioned as the setting of the David Allan Coe song "Daddy Was A God Fearin' Man" in his 1977 album Tattoo.

Steve Earle wrote and recorded "Harlan Man" included on the 1999 Grammy-nominated album " The Mountain" recorded with the Del McCoury Band.