Letcher County is a dry county, with the only exceptions being the Highland Winery,[7] the city of Whitesburg, and the city of Jenkins.

The killing of filmmaker Hugh O'Connor by a local landowner in 1967 brought Letcher County to national attention. 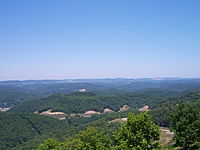 In an effort to bring tourists to Letcher County and to revitalize the local economy, the Pioneer Horse Trail is currently under construction on Pine Mountain.[9] The trail, part of an "adventure tourism" initiative spearheaded by Governor Steve Beshear, Beshear's wife Jane, and Lieutenant Governor Daniel Mongiardo, is scheduled for completion in the spring of 2009.[9]

However, controversy has arisen about whether or not the environment would be harmed during construction. In the summer of 2008, the Letcher County Fiscal Court had signed an agreement with state officials stating that the county would do an environmental impact study before construction would begin.[9] Documents obtained by the Lexington Herald-Leader under Kentucky's Open Records Act showed that construction actually began before the study was to take place. County-owned bulldozers started clearing trees in part of a wildlife management area in which heavy equipment was not permitted.[9] Environmental groups are asking the U.S. Fish and Wildlife Service to determine if any species on the threatened or endangered list were harmed.[9] Because of the environmental impact studies, construction has been halted for the time being.[10]

Most K-12 students in the county, with the exception of those living in the far eastern part of the county surrounding Jenkins, are served by the Letcher County Public Schools. The district operates nine elementary/middle schools, one vocational school, one high school, and an alternative education center.

In 2005, the doors to the new Letcher County Central High School[17] were opened in Ermine (the school's postal address, however, is in Whitesburg), with total costs of over $25,000,000. The school's nickname is the Cougars, and the school colors are blue, black, and silver. The school volleyball team has been to the state tournament every year since its creation and the wrestling team has had multiple regional champions. The baseball team has claimed three region titles in 2007, 2011, and 2013, with two state tournament appearances and one semi-state appearance. The baseball team has been led by the 14th region coach of the year, Bryan Dean, since its creation.[18] The boys Cross Country team has had 3 region championships and an individual region champion. The Girls basketball team made a State sweet sixteen appearance.[19]

Students in the Jenkins area are served by the Jenkins Independent Schools, which operates two elementary schools (located on two campuses in the communities of McRoberts and Burdine[20]) and a combined middle and high school with grades 7-12. Jenkins Independent Schools will be entering its 100th year in 2012. The middle/high school's athletic nickname is the Cavaliers/Lady Cavaliers. The school colors are Kelly Green and White.

Letcher County has a somewhat similar political history to West Virginia. Under the Fourth Party System it was a reliable Republican county, voting Republican in every election from 1884[21] to 1928.[22] However, with increasing unionization under the New Deal it turned for the next sixty to seventy years into a fairly solid Democratic county, apart from the 1956 and 1972 landslides and the candidacy of Catholic John F. Kennedy. However, since 2004 as the Democratic Party has become opposed to coal production due to global warming issues it has now become a solidly Republican county.

Public transportation is provided by LKLP Community Action Partnership with demand-response service and scheduled service from Whitesburg to Hazard.[30]