Washington County is a county located in the Commonwealth of Virginia. As of the 2010 census, the population was 54,876.[1] Its county seat is Abingdon.[2]

For thousands of years, indigenous peoples of varying cultures lived in the area. At the time of European encounter, the Chiska had a chief village near what is now Saltville, destroyed by the Spaniards in 1568. The Cherokee annexed the region from the Xualae around 1671, and ceded it to the Virginia Colony in 1770 at the Treaty of Lochaber.

The county was formed by Virginians in 1776 from Fincastle County. It was named for George Washington, who was then commander-in-chief of the Continental Army. Washington County is among the first geographical regions to be named after the president of the United States.

Washington County was raided by the Chickamauga Cherokee during the Cherokee–American wars. In July, 1776, Chief Dragging Canoe led an attack on Black's Fort (renamed Abingdon in 1778). The area remained prone to attack until after Chickamauga leader Bob Benge was finally slain by settlers in Washington County in 1794.

A farm in Washington County, Virginia 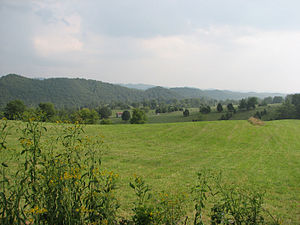 Farmland in Washington County near Friendship and Wideners Valley